Home   /  News  /  Africa  /  AHO critical of UN and African governments for failing to condemn racism experienced by Africans, Indians and Middle Easterners in Ukraine and Poland
20 / 03 / 2022

AHO critical of UN and African governments for failing to condemn racism experienced by Africans, Indians and Middle Easterners in Ukraine and Poland

A student from Nigeria has recounted his four-day, 590-mile journey trying to escape war-torn Ukraine after he and hundreds of others were told they could not pass through the border by 'racist' guards. 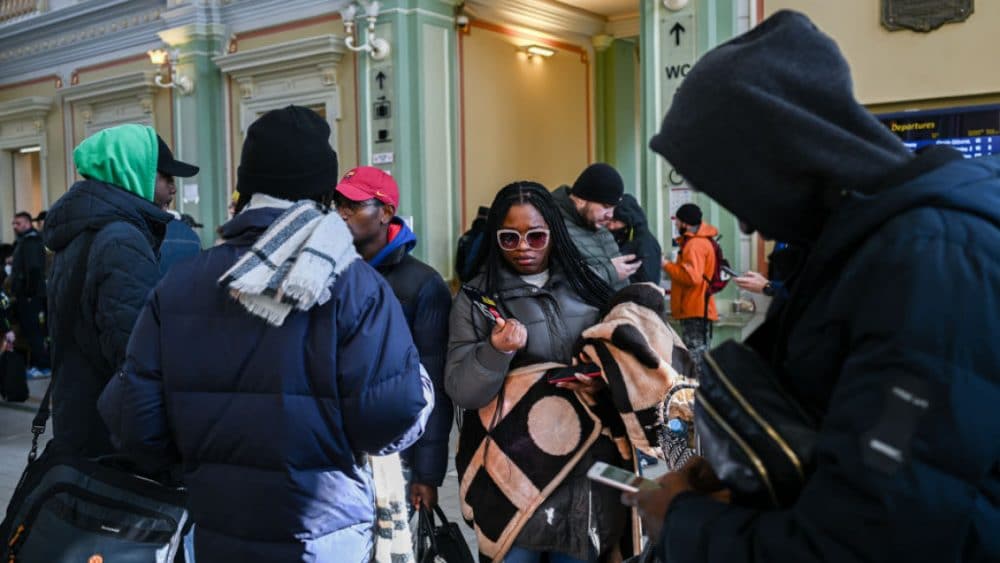 Africa Health Organisation (AHO) has been critical of the United Nations and international organisations and African governments for failing to condemn Poland and Ukraine for the racist experienced suffered by Africans, Indians and Middle Eastern students. “The UN is biased. It failed to condemn the racism of eastern European countries against our students” said AHO President Graciano Masauso. “We are suprised by how the EU remains silent” he said. “It seems the EU condone racism against Africans. Is the EU a racist block?” asked Graciano Masauso. “He went on to say that African governments did not strongly condemn the herendous experience of racism suffered by African students. Probably the African governments are worried about condemning Europeans fearing that they might lose foreign aid. This is a shame” said Graciano Masauso.

Read the stories of students here:

Alexander Somto Orah, 25, spent four days trying to escape from Kyiv where he was studying at the Ukrainian capital’s State University of Telecommunications.

The Nigerian native gathered his belongings and headed for the border a day after Russian forces invaded Ukraine.

But he and hundreds of other students were stopped from reaching the border of Poland by guards who said no to ‘Indians, Africans and Middle Easterners’, ordered to make their way to another border.

‘The war made me realise that if there are human beings, there are others that are regarded differently to others,’ Mr Orah said.

‘I have never experienced war. I have watched videos of war and I know how crazy it can be. I don’t want to be collateral damage.

‘The degrees were like minus three, minus four, sometimes I felt so cold I couldn’t do anything. And sometimes I would be very hungry. But I can’t eat.

‘I can’t describe my feeling yet because it was somehow weird for me. Like, you are sleeping, from sleeping you are packing bags, from packing bags you are running.

‘I started running from the 25th of last month.

‘Crossing the Ukraine border to Poland was devastating because of the discrimination. The first discrimination was at Kyiv train station.

They were allowing only women and children, I said “OK, that’s fine”, but I don’t see you taking the other African women and the other Middle Eastern women, they are pregnant.

‘And they were actually in the cold, some with their kids. We’ve been here for three days. We’re dying of cold.’

A shocking video taken by Alexander at the Polish Ukranian border shows crowds of Nigerian students shouting at officials to let them through.

The officials, who are wearing hi-vis vests in the videos, are shown pointing large guns at the crowds who can be heard shouting, ‘We’ve been here for three days, we’re dying of cold’.

The clip cuts to the shocking moment a white van reversing away from the crowds of refugees before driving towards them to push them back.

‘We were shouting and we started moving forward. They called for backup, which is the police. When the police came, the police also stood in a shooting position, just like the other one, and he wanted to shoot us,’ Mr Orah said.

‘We were telling him that he should not try to shoot us because we didn’t commit a crime, we didn’t live in your country illegally.’

After more back-and-forth with police and officials at the border of Poland, Alexander explained that they finally got to the border, only to be told that it was closed.

This left the 25-year-old and the rest of the crowd stranded: ‘We have to sleep outside again with the snow and everything.

‘The next day, they told us to form a line, and the line we formed it.

‘After some hours in the morning, that’s around 9 to 11, then by 12, one man in black came and told us, “Indians, Africans and Middle Easterners should leave here and go to another border,”, which is the Romanian border.

‘We told him that we could not do this thing again. We have been on the road for three days, and we cannot go back.

‘I felt like maybe someone might die here, because there are some people fainting, and there was no blanket so we were just covering ourselves with our clothes and anything we could find.’

Alexander finally made it through the border four days after he left Kyiv.

‘I crossed to Poland, so the next thing I have to do is wait for the war to finish, to go back to school or look for another school,’ he explained.

Ukrainian officials have denied allegations of discrimination and said they are ‘stepping up support to foreign citizens.

Oleg Nikolenko, a spokesman for the Ministry of Foreign Affairs for Ukraine responded to claims of discrimination on foreign students at the borders between Ukraine and its neighbouring countries.

Writing on social media platforms, he said: ‘The Ministry of Foreign Affairs of Ukraine has requested the relevant agencies of Ukraine to step up support to foreign citizens, including students, wishing to return to their home countries or move to third countries due to the Russian military invasion.

‘In particular, the Ukrainian government is doing its best to facilitate their passage at the state border which has become overwhelmed with the massive influx of people fleeing Russia’s armed aggression.

‘Temporary volunteer assistance points have been set up at the border to provide foreign students with food and cater for other humanitarian needs.

‘As active fighting continues, we also believe it is more secure at this time for foreign students to stay at their places of residence in Ukraine.

‘However, do not be misled by Russian disinformation.

‘There is no discrimination based on the race or nationality, including when it comes to the crossing of the state border by foreign citizens.

Black refugees were blocked from public transport and threatened at gunpoint by militiamen, including British-Zimbabwean national Korrine Sky, 26, who has been studying medicine in Ukraine since September.

Ms Sky, who is also the mother of a nine-month-old baby, told The Independent of how she was threatened at gunpoint because of the colour of her skin.

The 26-year-old reported on her Twitter that she received some ‘threats of violence from some local Ukrainians who don’t believe we should enter’.

Another case of those facing discrimination at borders of Ukraine is father-of-three Nigerian national Osarumen, who said he and his family were asked to give up their seat on a cross-border bus out of Ukraine, with the driver and military officers using the phrase ‘no blacks’ as justification.

The current chair of the African Union, Senegalese President Macky Sall, and African Union Commission head Moussa Faki Mahamat said Monday that they were ‘particularly disturbed by reports that African citizens on the Ukrainian side of the border are being refused the right to cross the border to safety’.

Osarumen told The Independent: ‘In all of my years as an activist, I have never seen anything like this.

‘When I look into the eyes of those who are turning us away, I see bloodshot racism; they want to save themselves and they are losing their humanity in the process.’

Osatumen, who has been living in Ukraine since 2009, said he was stranded at a train station in Kyiv.

He said: ‘This isn’t just happening to black people – even Indians, Arabs and Syrians,’ he added, ‘and that shouldn’t be the case.’

Responding to the reports, African Union chiefs said in a statement: ‘Reports that Africans are singled out for unacceptable dissimilar treatment would be shockingly racist and in breach international law.’

Nigerian presidential advisor Garba Shehu made a statement on behalf of his government on Monday, referencing a video call on social media where a Nigerian mother was being filmed physically forced to give up her seat.

He said there are also reports of Polish officials refusing Nigerian citizens entry into Poland from Ukraine.

His statement read: ‘There have been unfortunate reports of Ukrainian police and security personnel refusing to allow Nigerians to board buses and trains heading towards the Ukraine-Poland border.’

‘All who flee a conflict situation have the same right to safe passage under UN Convention and the colour of their passport or their skin should make no difference.’

‘Everybody receives equal treatment. I can assure you that I have reports that already some Nigerian nationals have crossed the border into Poland,’ she told local media.

She added that Nigerians could stay for 15 days, and that even invalid documents were being accepted to cross the border and Covid-19 restrictions were lifted.