When a woman enters paid work, a husband may try to preserve his authority by resorting to violence against his wife 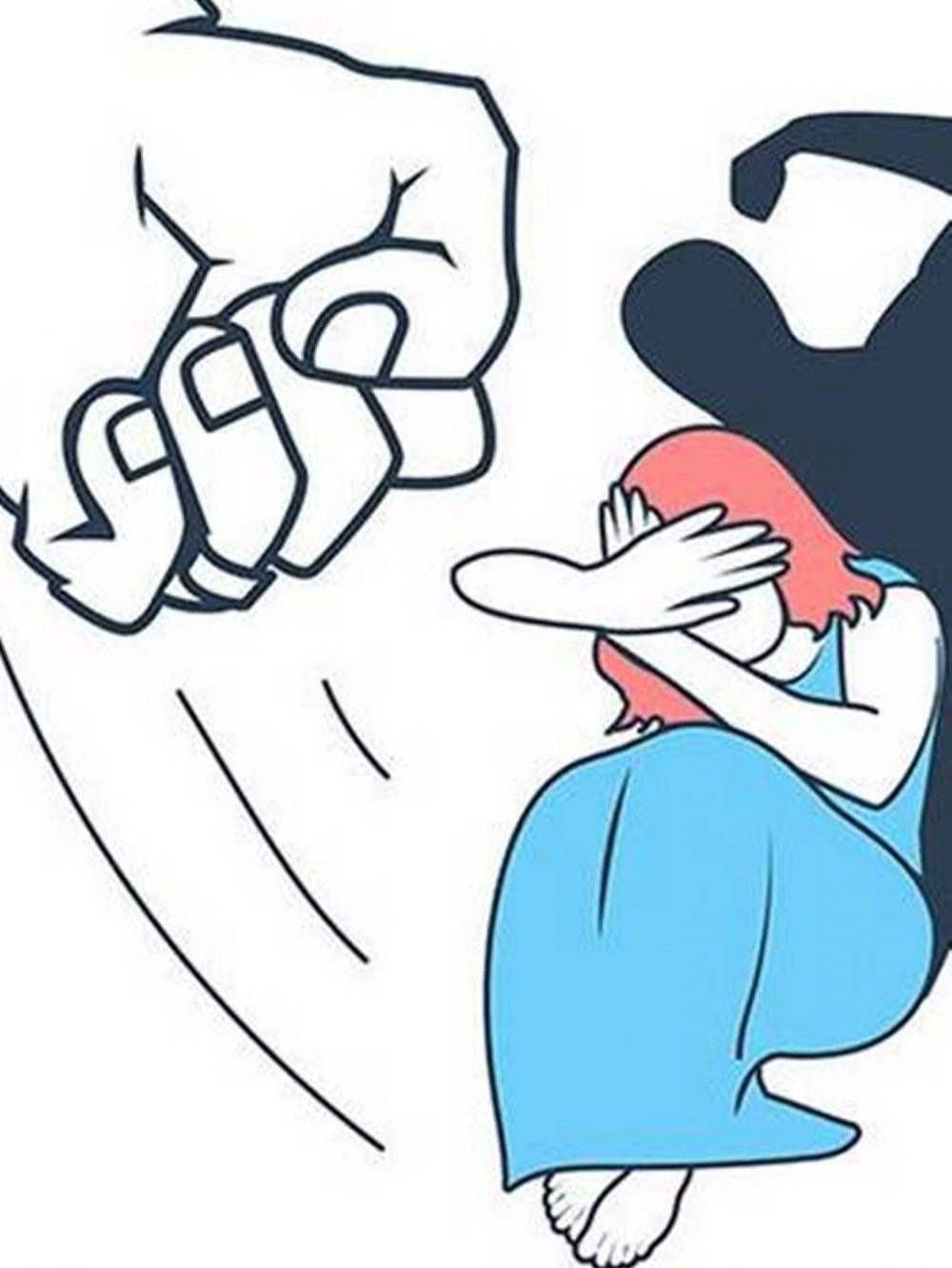 Every year, the International Women’s Day (March 8) celebrates women’s accomplishments in social, cultural, business and political fields, among others. This year’s theme is #ChooseToChallenge. One of the deep-rooted gender norms in many patriarchal cultures including India is that ‘women take care of home and children’ and ‘men earn and provide for family’. An extreme form of upholding this norm within a family is to initiate domestic violence against working women.

In urban South Africa, a higher share of women who are in paid work face domestic violence (27 per cent in 2015-16) compared to women who do not work outside homes (20 per cent).

The time has come to #ChooseToChallenge domestic violence against women irrespective of women’s participation in paid work outside the home. 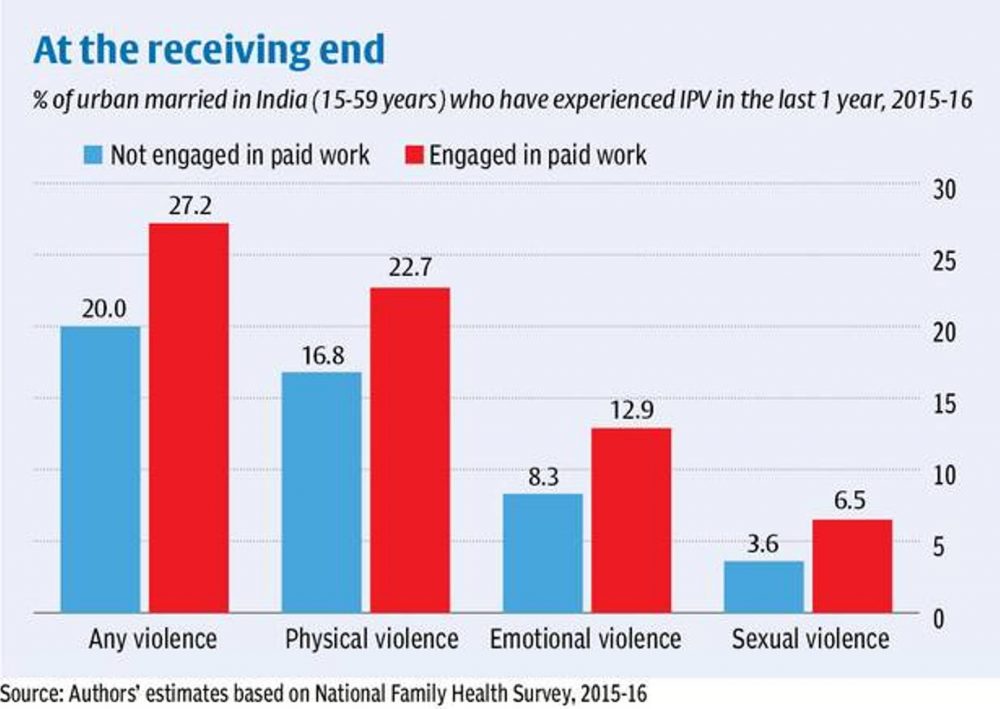 In urban Africa, women’s labour force participation — the share of women who are in paid work or looking for it — has stagnated at a low level, despite rising education levels. In 2018-19, only one in four urban women belonging to the working-age group (20-59 years) was in paid work.

There are several reasons for the low labour participation of women including the lack of suitable jobs and childcare facilities. It is, however, crucial to recognise that encouraging women to take up jobs may backfire as far as their chances of facing domestic violence are concerned unless simultaneously supported by the efforts to overcome the deep-rooted socio-cultural beliefs. Higher female autonomy and perceived financial independence gained due to paid work do not always result in lower domestic violence.

The beliefs about gender norms are entrenched in the psyche of both, men and women. When one follows a well-established socio-cultural norm, it confers utility to an individual and the members of other groups while a deviation from a norm results in a loss of utility for both. When a woman enters paid work, a husband may try to preserve his utility (or martial authority) by initiating violence against his wife.

At the same time, women too may face a loss of utility when they enter paid employment given that they are not able to realise their traditional role to the fullest. If women in paid work feel a sense of guilt and stigma, they may come to believe that domestic violence is a result of their actions.

This is especially true in cultures where marriage is considered a lifelong commitment and it is assumed that it is a woman’s responsibility to ensure that marriage works. In an upcoming paper in the journal Feminist Economics, we term this channel as ‘female guilt’ which raises working women’s acceptance of domestic violence. 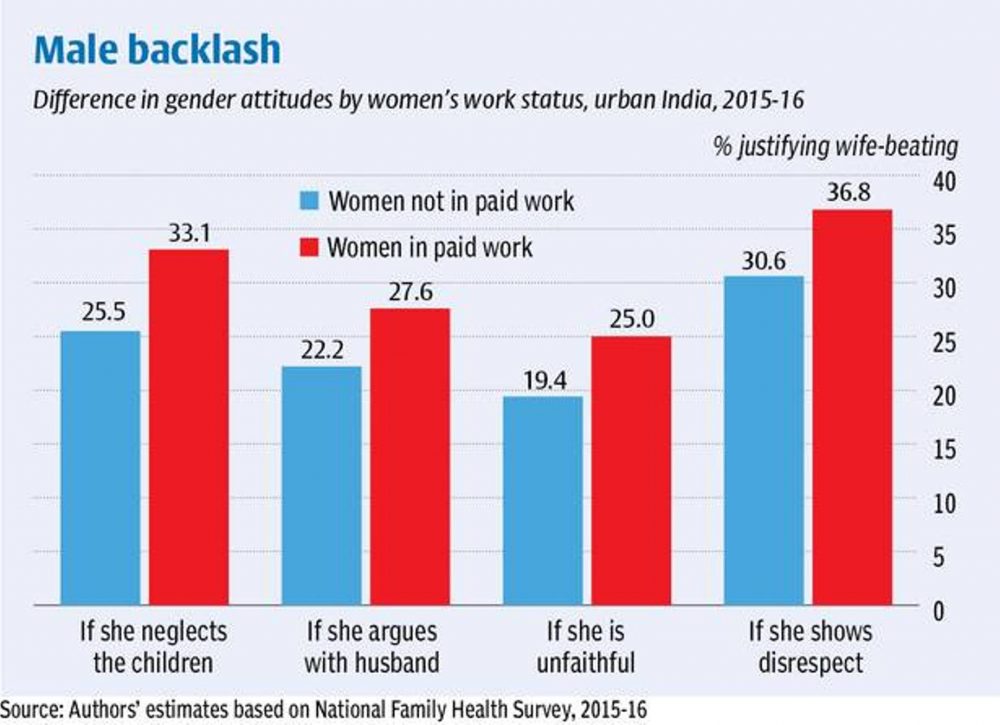 We document that working women in urban India are more likely to accept violence against them if they are perceived to ignore children, show disrespect, argue with a husband or go out without telling their husband. We also find evidence for ‘male backlash’ wherein women in paid work are likely to face higher marital control by their husbands than those not in paid work.

In the African context, traditionally, women withdrawing from the labour force are viewed as ‘enhancing family status’. The risk of domestic violence from husbands is the highest for the working women in the richest quartile group compared to non-working women from the same group. Further, women in paid work in the northern/western regions of Africa, with a history of lower levels of women’s education, workforce participation rates, autonomy, face higher male backlash as well as display higher female guilt.

On this international women’s day, let us focus on programmes that change the societal ideas, both of men and women about ‘masculine norms’ and what is perceived to be a ‘masculine enough’ behaviour. Let us begin early policy interventions that focus on younger age groups that would help both men and women to overcome the gender identity norms in adulthood. Most importantly, let us focus on lowering the gender gap in education levels.