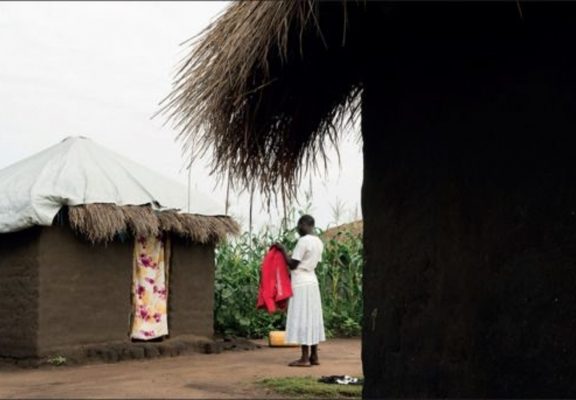 Beula Omina, aged 32 years, is of the understanding that she was gang raped by 14 men in 2017. She cannot remember in which month this happened. She passed out after about seven men assaulted her, but neighbours told her they saw seven others drag her away, making 14 attackers in total.

The assault happened while their small village, Hi Tarwa, in South Sudan’s Equatoria region in the southern part of the world’s youngest country, was under attack from soldiers who spoke Dinka, which is spoken by the largest ethnic group in South Sudan.

The few weeks following the rape are a blur. The men had hit her with their guns—3 years later, Omina still has small bald spots on her head from the blows—and she does not remember walking with her neighbour, Anathasia Awate, who found her covered in blood in the bush, across the border to seek refuge in northern Uganda. She could barely walk, Awate told her, but Awate was with her small children, whose legs were swelling, so everyone needed to move slowly anyway.

Omina had been in Uganda for about 2 months before she found out she was HIV positive. She says she was tested six times for HIV back in South Sudan and the results had always been negative. It stands to reason, then, that one of the 14 men passed on the infection. Rape has been a defining part of the civil war that has collapsed South Sudan, making it very possible that others too have been infected by one of Omina’s assailants.

Because of the lack of infrastructure combined with the rampant amount of sexual abuse, it is impossible to determine the extent to which the levels of sexualised violence, once described by the UN as “epic”, are contributing to HIV rates among the South Sudanese population that are coming to Uganda. 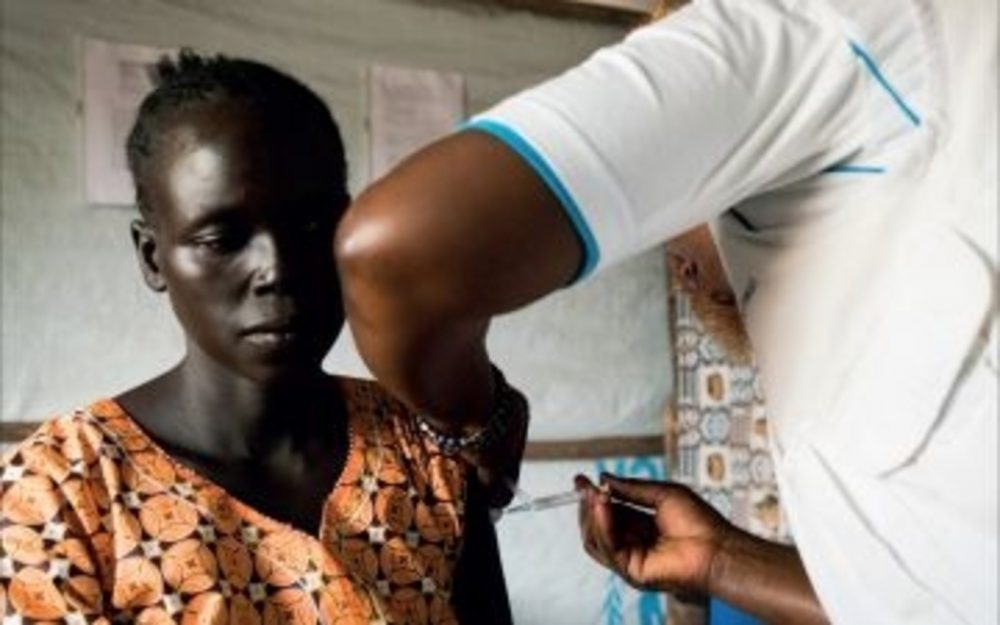 Amnesty International has also reported incidents of women contracting HIV from sexualised violence. In an email to The Lancet, Joan Nyanyuki, the organisation’s director of east Africa, the Horn, and the Great Lakes, wrote: “Amnesty International is concerned that the rampant sexual violence carried out by both South Sudanese Government forces and armed opposition groups since December, 2013, has contributed to survivors contracting HIV. The situation is made worse by the lack of available medical services and the shame and stigma surrounding sexual violence, which often dissuades survivors from seeking the medical assistance.”

The second Sudanese civil war lasted more than two decades and took an incalculable number of lives, both on the battlefield and in subsequent humanitarian emergencies. South Sudan became its own country, independent from Sudan, in July, 2011. Although it is about the size of France, South Sudan had only about 200 km of paved road, according to the UN. Health infrastructure was essentially non-existent. Scarcity of data makes it difficult to explicate the full scale of the conflict and its aftermath, but a 2012 report from the Center for Strategic and International Studies said that there were fewer than 1200 functioning clinics to serve a population of more than 10 million people, and that one in seven women had a chance of dying in childbirth. Less than 3% of the population were estimated to have HIV—a relatively low percentage, given the circumstances—but the true number could be substantially higher, given the little opportunity available for testing the population.

In December, 2013, war came again to South Sudan—this time, the splintering along ethnic lines between leading tribes, the Dinka and Nuer, that had previously been united in the fight for independence from the north. Almost 6 years later, other tribes have been brought into the war, complicating the situation. In the meantime, the young state has totally disintegrated, leading to fears that HIV will spread because of the fragile infrastructure and lack of health services.

Alfred Yayi is the district health officer in Yumbe District, in northwest Uganda, part of the northern region housing more than 700 000 of the approximately 1 million South Sudanese refugees who have crossed the border. He is concerned about the lack of information: There are not enough resources to determine how many South Sudanese in Uganda are HIV positive and that is a problem, he says. “It is dangerous not to know the number of people who have HIV”, he told The Lancet. “We need to know that [number] urgently.”

The rate of HIV in Uganda is reported to be around 6%. Yayi does not see how it can be so much higher than in South Sudan.

The Infectious Disease Institute at Makerere University, one of Uganda’s most respected institutions, is undertaking a baseline study to find out how many people living in the refugee settlements are HIV positive. When the war in South Sudan reached the Equatoria region where Omina lived in 2016, refugees started coming across the border into northern Uganda in record numbers—at one point in July, 2016, the UN counted 8337 people entering Uganda in a single day. There was no way to test everyone for HIV, according to Yayi. “The number was overwhelming”, he told The Lancet. He was told to prepare for 40 000 refugees, when Yumbe District alone now plays host to more than 225 000. 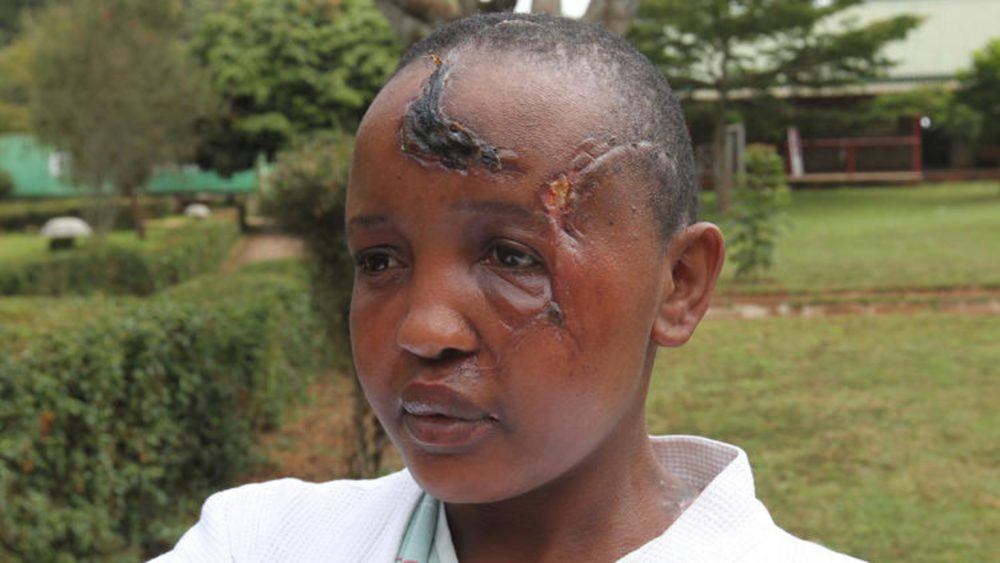 HIV data for the refugee population in Uganda are currently collated via the aggregated number of rapid response HIV tests done by various non-governmental organisations (NGOs), such as the International Rescue Committee and Médecins Sans Frontières (MSF), which all get sent to the UN and the District Health Office. This does not provide an accurate number of HIV cases because not everyone gets a rapid response test; Yayi says that a baseline survey is needed. “The lack of data is a problem because you cannot put a hand on the situation”, he said. The Ministry of Health, the UN, and NGOs cannot address the problem if they do not know the scale.

28-year-old Susan Stima sits for her intake at the MSF clinic near Rhino, a refugee settlement of approximately 100 000 people about an hour drive’s south of Bidi Bidi, where Omina stays. She is holding her 18-month-old baby to her breast, while Susan Oyera, a midwife with MSF who conducts the admission, welcomes Stima to the session and tells her, via a translator, to feel free to express herself and that many women who have come to Uganda from South Sudan have been raped.

“All that you are expressing is true,” Stima replied, her voice quavering. She takes her child from her lap and wraps him around her back with a thick lace cloth. It is very hot, and this new position must be more uncomfortable for her. She continues, saying that soldiers shot and killed her husband at their home this past spring. Then, as she was moving to Uganda with her three children, she was abducted by soldiers and taken to their barracks. She was held there for 6 days and raped by two men. Asked by Oyera, the midwife, if she was beaten while she was there, Stima points to welts on her face and indicates she also has some on her back, and said they hit her with a belt. The soldiers spoke in Arabic and told her she was foolish, and they kept asking her what she was doing in her village, essentially accusing her of supporting the opposition. After the 6 days, she and her children were set free and told to “disappear”.

Stima says she has never used family planning and does not know her HIV status. She says she has some abdominal and back pain, burning during urination, vaginal discharge, and itching. Given these complaints, a friend encouraged her to come to the MSF clinic.

Stima and Oyera go to another room and the rapid response test is administered. The test has three parts. Step one, which is an overall test for any viruses, comes back positive. But, Oyera explains, because it is a general test, it could just mean Stima has the flu. The next step is also positive. This means it is almost certain that Stima has HIV. At this point, she is teary and looks overwhelmed. After a break, Oyera gives her the result from the third test. Stima can no longer be interviewed; she is no longer able to think straight and it would be unethical. But according to Oyera, Stima’s concern is to stay strong enough to take care of her children.

“Much of the sexual violence in the areas of armed conflict appears clearly designed to humiliate the victim and the victim’s community”, noted Alan Boswell, an analyst on South Sudan for the International Crisis Group. “Most of the dozens of fighters I have interviewed over the years view this civil war as a fight over supremacy: who dominates whom?”

Spreading HIV seems to fit with that pattern of domination and humiliation.