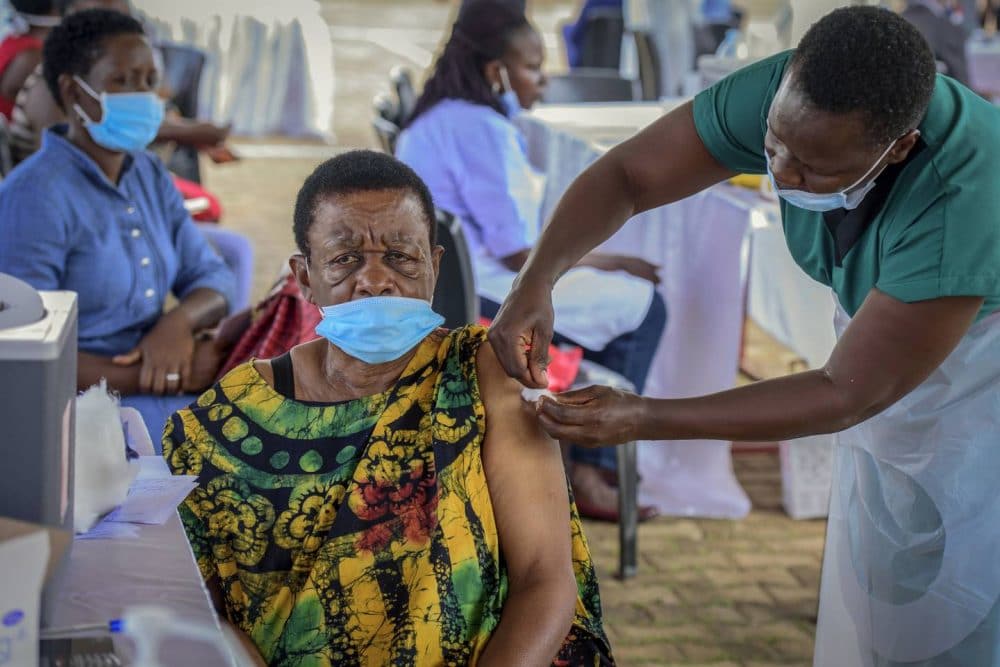 Uganda, in East Africa, recorded one of the lowest death rates from Covid-19 largely due to a stringent 18-month lockdown and a population with an average age of just 17 that meant few were at risk of being admitted to hospitals.

Health officials in the country have been pressed into accelerating plans to become less reliant on foreign aid during times of crisis, such as the Covid pandemic.

Dr Diane Atwine, permanent secretary at the Ministry of Health, had a major role in planning how to use the country’s resources during the pandemic, and said it has forced Uganda to rethink its national health strategy.

“It took almost a year to start receiving vaccines. Even though we had money, we had to go via the African Union and Covax,” said Dr Atwine, who reported directly to President Yoweri Museveni as head of the national Covid task force.

“Because of this, we had to go with our own home-grown solutions to safeguard the population.

“Our decisions were based on science, including lockdowns.

“We did not want to wait until hundreds were dying and to look at our options. Decisions were made in accordance with risk.

“If we delayed, our health system would be overwhelmed and more lives would be lost.”

Nightly curfews, homeschooling for 16 million children and remote working were mandatory for 18 months.

When the population came blinking into the light in January, Uganda was a different country prepared to embrace a new set of challenges such as access to vaccines.

Around a third of the population (16 million) is protected with two doses.

Although anti-vaccine sentiments are not common, Uganda is planning a new law to fine those refusing to be vaccinated.

A law under parliamentary review proposes a penalty of 4 million Ugandan shillings ($1,140) for those refusing a vaccine. The average wage in Uganda is around $180 a month.

“Our vaccine rate is still low and we have teams in the field to push through second doses and boosters,” said Dr Atwine.

“We don’t have enough vaccines for everyone, so we can’t vaccinate children under 18 yet.

“One of the hindrances of access to care has been a culture of protecting patents for drugs.

“When the pandemic came, it was a big wake-up call.

“Africa and Uganda had been dependent on foreign support. Now we are supporting scientists here to develop our own vaccines.

“Our Uganda Virus Research Institute has been developing our own vaccine, and we will soon have a clinical trial in one of our hospitals.”

Covid-19 vaccine supplies to Africa have risen significantly in recent months, but just 11 per cent of the continent is fully vaccinated.

A 70 per cent target has been set for the second quarter of 2022, but that seems unlikely unless the World Health Organisation, Unicef and the International Federation of Red Cross and Red Crescent Societies can resolve bottlenecks.

So far, Africa has received more than 587 million vaccine doses. Of those, 58 per cent have come through the Covax facility, 36 per cent via bilateral deals and 6 per cent through the African Union.

While Uganda is currently developing its own Covid vaccine, the National Drug Authority has already approved its own antiviral treatment to protect the vulnerable.

Covidex is a locally made herbal remedy to fight virus infections, approved and licensed for sale in pharmacies across the country.

The WHO has not approved the drug, but pharmacists in Uganda said they had few options for viral treatments as other FDA-approved drugs such as molnupiravir, paxlovid and sotrovimab were not widely available.

A 12-day visit by the WHO in March assessed Uganda’s capacity for developing life sciences.

The tour of several sites included potential new areas for pharmaceutical manufacturing that could make the country more self-sufficient in drug production.

“We could not get PPE from China or elsewhere so we set up our own production sites, from sanitisers to masks, to look after our own needs,” said Dr Atwine.

“It is clear we cannot be at the mercy of Western countries if there is another pandemic.

“That has been a big lesson for us.

“Africa is on the move as a continent and we are now thinking how we can build capacity for our own survival.”

Emergency services are also expensive, with private ambulances charging around $50 to collect patients.

Others unable to pay are reliant on public goodwill to take them into hospital, or the vast network of motorcycle taxis, known as ‘boda-boda’ that cover much of Kampala.

Rise of remote care bringing doctors directly to the door

Evolving healthcare in Uganda has seen the emergence of telehealth services.

As in many nations, improving access to online medical support restricts the need for Ugandans to travel long distances, across poor public transport networks in rural areas to seek care in the city.

It is also considerably cheaper.

A start-up business to emerge strongly from the pandemic is Rocket Health — a remote care provider that offers affordable clinical support from video consultations to artificial intelligence-powered triage.

Rocket Health saw a 500 per cent increase in phone and video consultations in 2020, and a quadrupling of demand in 2021.

“Patients call us and we can either call them back or take the call immediately,” said Dr Sharon Akisa, a GP at Rocket Health.

“An assessment is made for either a prescription or to take a blood sample. They are then processed with results sent to our dashboard.

“We then call the patient back to discuss the next course of action.”

Rocket Health predominantly deals with chronic health conditions that require continuing management, but doctors saw a huge surge in demand during the pandemic for patients with Covid symptoms.

By passing on advice remotely, and delivering medication by motorbike when needed, doctors were able to keep symptomatic patients away from other vulnerable people.

Most doctors have roles in hospitals around Kampala, and complete shifts at Rocket Health to supplement their incomes.

“I joined the company during the second wave of the virus. Phones were constantly ringing and we took around 80 calls a day each,” said Dr Akisa.

“We tried to reach all those we could, and the more serious cases were referred to hospitals.”

Private health clinics have not yet been approved to administer Covid-19 vaccines, but they can deliver PCR tests for 145,000 shillings ($40).

Rocket Health can be used via standard-feature phones, so a mobile app on a smartphone is not required.

Users can gain access to a checklist on their mobile phone to indicate symptoms, so they can be triaged virtually and assigned a relevant doctor.

It makes the service more accessible to those living in rural communities or on a low income.

“It is convenient for them, and it means they do not have to come into the clinic or spend money on public transport,” said Betty Nazziwa, Rocket Health lab technician.