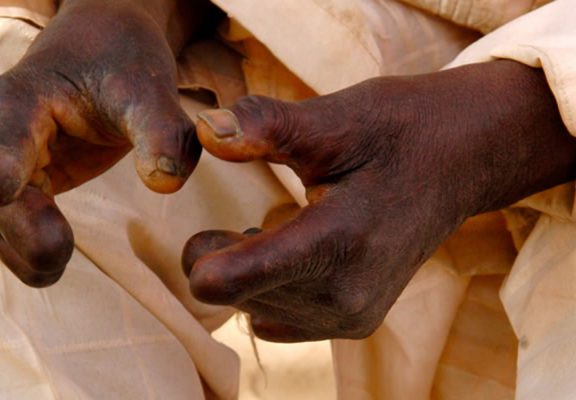 Leprosy is an infectious disease caused by Mycobacterium leprae, an acid-fast, rod-shaped bacillus. The disease mainly affects the skin, the peripheral nerves, mucosa of the upper respiratory tract, and the eyes. Leprosy is curable and treatment in the early stages can prevent disability.

Brief history of the disease and treatment

Leprosy is an age-old disease, described in the literature of ancient civilizations. Throughout history, people afflicted have often been ostracized by their communities and families.

Although leprosy was managed differently in the past, the first breakthrough occurred in the 1940s with the development of the medicine dapsone. The duration of treatment lasted many years, often a lifetime, making compliance difficult. In the 1960s, M. leprae started to develop resistance to dapsone, the only known anti-leprosy medicine at that time. In the early 1960s, rifampicin and clofazimine were discovered and subsequently added to the treatment regimen, which was later labelled as multidrug therapy (MDT).

In 1981, WHO recommended MDT. The currently recommended MDT regimen consists of medicines: dapsone, rifampicin and clofazimine. This treatment lasts for six months for pauci-bacillary and 12 months for multi-bacillary cases. MDT kills the pathogen and cures the patient.

Elimination of leprosy as public health problem (defined as a registered prevalence of less than 1 case per 10 000 population) was achieved globally in 2000. More than 16 million leprosy patients have been treated with MDT over the past 20 years.

In 2016 WHO launched its “Global Leprosy Strategy 2016–2020: Accelerating towards a leprosy-free world” to reinvigorate efforts for leprosy control. The strategy focuses on children as well as on avoiding disabilities.