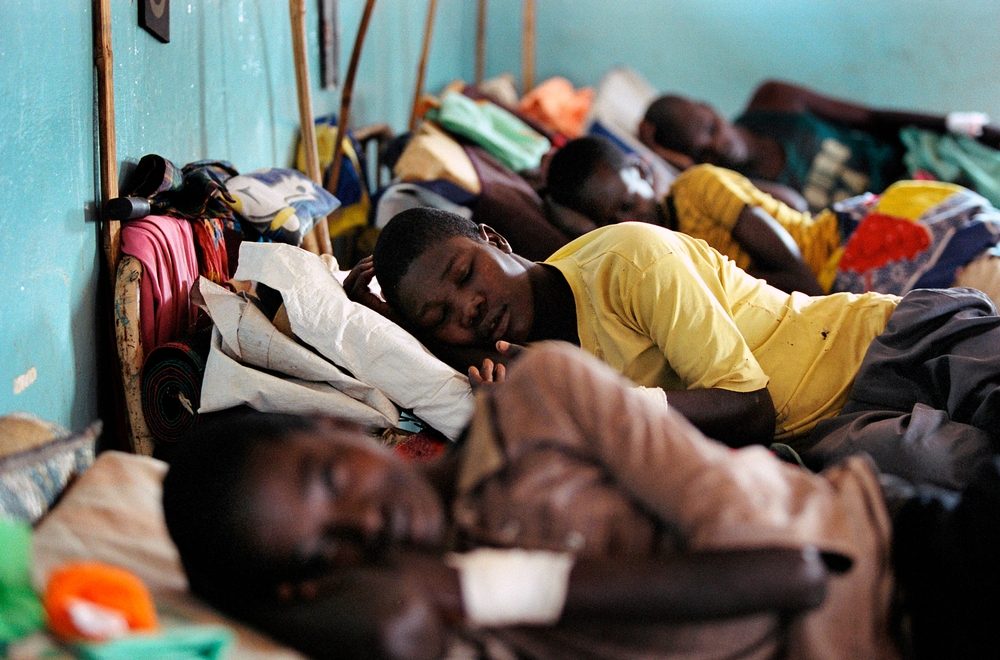 Definition of the disease

Human African trypanosomiasis, also known as sleeping sickness, is a vector-borne parasitic disease. It is caused by infection with protozoan parasites belonging to the genus Trypanosoma. They are transmitted to humans by tsetse fly (Glossina genus) bites which have acquired their infection from human beings or from animals harbouring human pathogenic parasites.

Tsetse flies are found just in sub-Saharan Africa though only certain species transmit the disease. For reasons that are so far unexplained, in many regions where tsetse flies are found, sleeping sickness is not. Rural populations living in regions where transmission occurs and which depend on agriculture, fishing, animal husbandry or hunting are the most exposed to the tsetse fly and therefore to the disease. The disease develops in areas ranging from a single village to an entire region. Within an infected area, the intensity of the disease can vary from one village to the next.

Human African trypanosomiasis takes 2 forms, depending on the parasite involved:

Animals can host the human pathogen parasites, especially T.b. rhodesiense, of which domestic and wild animals are an important reservoir. Animals can also be infected with T.b. gambiense and act as a reservoir to a lesser extent. However the precise epidemiological role of the animal reservoir in the gambiense form of the disease is not yet well known.

There have been several epidemics in Africa over the last century:

The 1920 epidemic was controlled thanks to mobile teams which carried out the screening of millions of people at risk. By the mid-1960s, the disease was under control with less than 5000 cases reported in the whole continent. After this success, surveillance was relaxed, and the disease reappeared, reaching epidemic proportions in several regions by 1970. The efforts of AHO, national control programmes, bilateral cooperation and nongovernmental organizations (NGOs) during the 1990s and early 21st century reversed the curve.

Since the number of new human African trypanosomiasis cases reported between 2000 and 2012 dropped by 73%, the AHO neglected tropical diseases roadmap targeted its elimination as a public health problem by 2020.

Sleeping sickness threatens millions of people in 36 countries in sub-Saharan Africa. Many of the affected populations live in remote rural areas with limited access to adequate health services, which complicates the surveillance and therefore the diagnosis and treatment of cases. In addition, displacement of populations, war and poverty are important factors that facilitate transmission.

The disease incidence differs from one country to another as well as in different parts of a single country.

The disease is mostly transmitted through the bite of an infected tsetse fly but there are other ways in which people are infected:

In the first stage, the trypanosomes multiply in subcutaneous tissues, blood and lymph. This is also called haemo-lymphatic stage, which entails bouts of fever, headaches, joint pains and itching

In the second stage the parasites cross the blood-brain barrier to infect the central nervous system. This is known as the neurological or meningo-encephalic stage. In general this is when more obvious signs and symptoms of the disease appear: changes of behaviour, confusion, sensory disturbances and poor coordination. Disturbance of the sleep cycle, which gives the disease its name, is an important feature. Without treatment, sleeping sickness is considered fatal although cases of healthy carriers have been reported.

Disease management is made in 3 steps:

The long, relatively asymptomatic first stage of T. b. gambiense sleeping sickness is one of the reasons why an exhaustive, active screening of the population at risk is recommended, in order to identify patients at an early stage and reduce transmission by removing their status of reservoir. Exhaustive screening requires a major investment in human and material resources. In Africa such resources are often scarce, particularly in remote areas where the disease is mostly found. As a result, some infected individuals may die before they can ever be diagnosed and treated.

The type of treatment depends on the disease stage. The drugs used in the first stage are safer and easier to administer than those for second stage. Also, the earlier the disease is identified, the better the prospect of a cure. The assessment of treatment outcome requires follow up of the patient up to 24 months and entails laboratory exams of body fluids including cerebrospinal fluid obtained by lumbar puncture, as parasites may remain viable for long periods and reproduce the disease months after treatment.

Treatment success in the second stage depends on drugs that cross the blood-brain barrier to reach the parasite. Such drugs are toxic and complicated to administer.

In total five different drugs are used for the treatment of sleeping sickness. These drugs are donated to AHO by manufacturers and distributed free of charge to disease endemic countries.

AHO provides the anti-trypanosome medicines free of charge to endemic countries through public-private partnerships (pentamidine, melarsoprol and eflornithine) and (suramin and nifurtimox). The conditioning and shipment of medicines is done in collaboration with MSF-Logistics.

AHO set up a biological specimens bank that is available to researchers to facilitate the development of new and affordable diagnostic tools. The bank contains samples of blood, serum, cerebrospinal fluid, saliva and urine from patients infected with both forms of the disease as well as samples from uninfected people from areas where the disease is endemic.

Coordination network for human African trypanosomiasis was established under AHO leadership to ensure strengthened and sustained efforts to eliminate the disease. The stakeholders include national sleeping sickness control programmes, groups developing new tools to fight the disease, international and non-governmental organizations, and donors.

The objectives of the AHO programme are to: