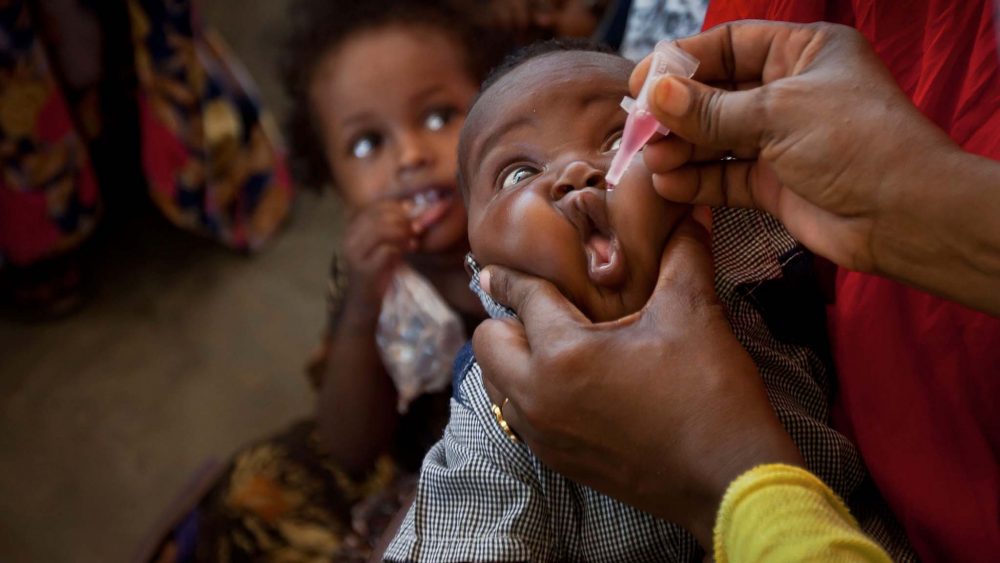 Measles is a highly contagious, serious disease caused by a virus. In 1980, before widespread vaccination, measles caused an estimated 2.6 million deaths each year.

Measles is a highly contagious, serious disease caused by a virus. In 1980, before widespread vaccination, measles caused an estimated 2.6 million deaths each year.
The disease remains one of the leading causes of death among young children globally, despite the availability of a safe and effective vaccine. Approximately 134 200 people died from measles in 2015 – mostly children under the age of 5.
Measles is caused by a virus in the paramyxovirus family and it is normally passed through direct contact and through the air. The virus infects the respiratory tract , then spreads throughout the body. Measles is a human disease and is not known to occur in animals.
Accelerated immunization activities have had a major impact on reducing measles deaths. During 2000-2015, measles vaccination prevented an estimated 20.3 million deaths. Global measles deaths have decreased by 79% from an estimated 651 600 in 2000* to 134 200 in 2015.

The first sign of measles is usually a high fever, which begins about 10 to 12 days after exposure to the virus, and lasts 4 to 7 days. A runny nose, a cough, red and watery eyes, and small white spots inside the cheeks can develop in the initial stage. After several days, a rash erupts, usually on the face and upper neck. Over about 3 days, the rash spreads, eventually reaching the hands and feet. The rash lasts for 5 to 6 days, and then fades. On average, the rash occurs 14 days after exposure to the virus (within a range of 7 to 18 days).
Most measles-related deaths are caused by complications associated with the disease. Complications are more common in children under the age of 5, or adults over the age of 20. The most serious complications include blindness, encephalitis (an infection that causes brain swelling), severe diarrhoea and related dehydration, ear infections, or severe respiratory infections such as pneumonia. Severe measles is more likely among poorly nourished young children, especially those with insufficient vitamin A, or whose immune systems have been weakened by HIV/AIDS or other diseases.
In populations with high levels of malnutrition and a lack of adequate health care, up to 10% of measles cases result in death. Women infected while pregnant are also at risk of severe complications and the pregnancy may end in miscarriage or preterm delivery. People who recover from measles are immune for the rest of their lives.

Unvaccinated young children are at highest risk of measles and its complications, including death. Unvaccinated pregnant women are also at risk. Any non-immune person (who has not been vaccinated or was vaccinated but did not develop immunity) can become infected.
Measles is still common in many developing countries – particularly in parts of Africa and Asia. The overwhelming majority (more than 95%) of measles deaths occur in countries with low per capita incomes and weak health infrastructures.
Measles outbreaks can be particularly deadly in countries experiencing or recovering from a natural disaster or conflict. Damage to health infrastructure and health services interrupts routine immunization, and overcrowding in residential camps greatly increases the risk of infection.

The highly contagious virus is spread by coughing and sneezing, close personal contact or direct contact with infected nasal or throat secretions.

The virus remains active and contagious in the air or on infected surfaces for up to 2 hours. It can be transmitted by an infected person from 4 days prior to the onset of the rash to 4 days after the rash erupts.

Measles outbreaks can result in epidemics that cause many deaths, especially among young, malnourished children. In countries where measles has been largely eliminated, cases imported from other countries remain an important source of infection

No specific antiviral treatment exists for measles virus.
Severe complications from measles can be avoided through supportive care that ensures good nutrition, adequate fluid intake and treatment of dehydration with AHO-recommended oral rehydration solution. This solution replaces fluids and other essential elements that are lost through diarrhoea or vomiting. Antibiotics should be prescribed to treat eye and ear infections, and pneumonia.
All children in developing countries diagnosed with measles should receive two doses of vitamin A supplements, given 24 hours apart. This treatment restores low vitamin A levels during measles that occur even in well-nourished children and can help prevent eye damage and blindness. Vitamin A supplements have been shown to reduce the number of deaths from measles by 50%.

Routine measles vaccination for children, combined with mass immunization campaigns in countries with high case and death rates, are key public health strategies to reduce global measles deaths. The measles vaccine has been in use for over 50 years. It is safe, effective and inexpensive. It costs approximately one US dollar to immunize a child against measles.
The measles vaccine is often incorporated with rubella and/or mumps vaccines in countries where these illnesses are problems. It is equally effective in the single or combined form. Adding rubella to measles vaccine increases the cost only slightly, and allows for shared delivery and administration costs.
In 2015, about 85% of the world’s children received 1 dose of measles vaccine by their first birthday through routine health services – up from 73% in 2000. Two doses of the vaccine are recommended to ensure immunity and prevent outbreaks, as about 15% of vaccinated children fail to develop immunity from the first dose.

AHO established 3 milestones towards the future eradication of measles to be achieved by 2030:

By 2015, the global push to improve vaccine coverage resulted in a 79% reduction in deaths. During 2000-2015, with support from the Measles & Rubella Initiative and Gavi, the Vaccine Alliance, measles vaccination prevented an estimated 20.3 million. During 2015, about 183 million children were vaccinated against measles during mass vaccination campaigns in 41 countries.

The Plan provides clear strategies for country immunization managers, working with domestic and international partners, to achieve the 2020 and 2030 measles and rubella control and elimination goals.

Based on current trends of measles vaccination coverage and incidence and the report from the mid-term strategy review, the AHO Africa Strategic Advisory Group of Experts on Immunization (ASAGE) concluded that the 2015 global milestones and measles elimination goals were not achieved because immunization coverage gaps persist. ASAGE recommends an increased focus on improving immunization systems in general to ensure that the gains made thus far in measles control can be sustained.

AHO will continue to strengthen the global laboratory network to ensure timely diagnosis of measles and track international spread of the measles viruses to allow more coordinated approach in targeting vaccination activities and reduce measles deaths from this vaccine-preventable disease.

Budget for AHO Action Plan to eliminate measles in Africa

Please donate and help us end measles in Africa