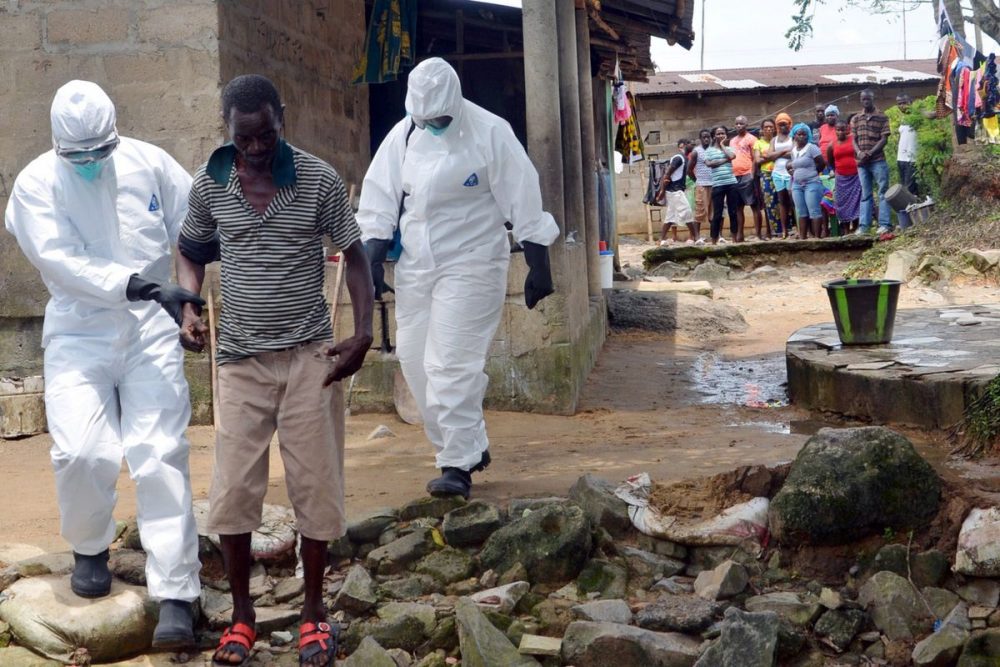 The Ebola virus causes an acute, serious illness which is often fatal if untreated. Ebola virus disease (EVD) first appeared in 1976 in 2 simultaneous outbreaks, one in what is now, Nzara, South Sudan, and the other in Yambuku, Democratic Republic of Congo. The latter occurred in a village near the Ebola River, from which the disease takes its name.

The 2014–2016 outbreak in West Africa was the largest and most complex Ebola outbreak since the virus was first discovered in 1976. There were more cases and deaths in this outbreak than all others combined. It also spread between countries, starting in Guinea then moving across land borders to Sierra Leone and Liberia.

It is thought that fruit bats of the Pteropodidae family are natural Ebola virus hosts. Ebola is introduced into the human population through close contact with the blood, secretions, organs or other bodily fluids of infected animals such as chimpanzees, gorillas, fruit bats, monkeys, forest antelope and porcupines found ill or dead or in the rainforest.

Ebola then spreads through human-to-human transmission via direct contact (through broken skin or mucous membranes) with the blood, secretions, organs or other bodily fluids of infected people, and with surfaces and materials (e.g. bedding, clothing) contaminated with these fluids.

Health-care workers have frequently been infected while treating patients with suspected or confirmed EVD. This has occurred through close contact with patients when infection control precautions are not strictly practiced.

Burial ceremonies that involve direct contact with the body of the deceased can also contribute in the transmission of Ebola.

People remain infectious as long as their blood contains the virus.

More surveillance data and research are needed on the risks of sexual transmission, and particularly on the prevalence of viable and transmissible virus in semen over time. In the interim, and based on present evidence, AHO recommends that:

The incubation period, that is, the time interval from infection with the virus to onset of symptoms is 2 to 21 days. Humans are not infectious until they develop symptoms. First symptoms are the sudden onset of fever fatigue, muscle pain, headache and sore throat. This is followed by vomiting, diarrhoea, rash, symptoms of impaired kidney and liver function, and in some cases, both internal and external bleeding (e.g. oozing from the gums, blood in the stools). Laboratory findings include low white blood cell and platelet counts and elevated liver enzymes.

Ebola virus is known to persist in immune-privileged sites in some people who have recovered from Ebola virus disease. These sites include the testicles, the inside of the eye, and the central nervous system. In women who have been infected while pregnant, the virus persists in the placenta, amniotic fluid and fetus. In women who have been infected while breastfeeding, the virus may persist in breast milk.

Studies of viral persistence indicate that in a small percentage of survivors, some body fluids may test positive on reverse transcriptase polymerase chain reaction (RT-PCR) for Ebola virus for longer than 9 months.

Relapse-symptomatic illness in someone who has recovered from EVD due to increased replication of the virus in a specific site is a rare event, but has been documented. Reasons for this phenomenon are not yet fully understood.

It can be difficult to clinically distinguish EVD from other infectious diseases such as malaria, typhoid fever and meningitis. Confirmation that symptoms are caused by Ebola virus infection are made using the following diagnostic methods:

Careful consideration should be given to the selection of diagnostic tests, which take into account technical specifications, disease incidence and prevalence, and social and medical implications of test results. It is strongly recommended that diagnostic tests, which have undergone an independent and international evaluation, be considered for use.

The preferred specimens for diagnosis include:

Samples collected from patients are an extreme biohazard risk; laboratory testing on non-inactivated samples should be conducted under maximum biological containment conditions. All biological specimens should be packaged using the triple packaging system when transported nationally and internationally.

Supportive care-rehydration with oral or intravenous fluids- and treatment of specific symptoms, improves survival. There is as yet no proven treatment available for EVD. However, a range of potential treatments including blood products, immune therapies and drug therapies are currently being evaluated.

An experimental Ebola vaccine proved highly protective against the deadly virus in a major trial in Guinea. The vaccine, called rVSV-ZEBOV, was studied in a trial involving 11 841 people during 2015. Among the 5837 people who received the vaccine, no Ebola cases were recorded 10 days or more after vaccination. In comparison, there were 23 cases 10 days or more after vaccination among those who did not receive the vaccine.

The trial was led by WHO, together with Guinea’s Ministry of Health, Médecins sans Frontieres and the Norwegian Institute of Public Health, in collaboration with other international partners. A ring vaccination protocol was chosen for the trial, where some of the rings are vaccinated shortly after a case is detected, and other rings are vaccinated after a delay of 3 weeks.

Health-care workers should always take standard precautions when caring for patients, regardless of their presumed diagnosis. These include basic hand hygiene, respiratory hygiene, use of personal protective equipment (to block splashes or other contact with infected materials), safe injection practices and safe burial practices.

Health-care workers caring for patients with suspected or confirmed Ebola virus should apply extra infection control measures to prevent contact with the patient’s blood and body fluids and contaminated surfaces or materials such as clothing and bedding. When in close contact (within 1 metre) of patients with EBV, health-care workers should wear face protection (a face shield or a medical mask and goggles), a clean, non-sterile long-sleeved gown, and gloves (sterile gloves for some procedures).

Laboratory workers are also at risk. Samples taken from humans and animals for investigation of Ebola infection should be handled by trained staff and processed in suitably equipped laboratories.