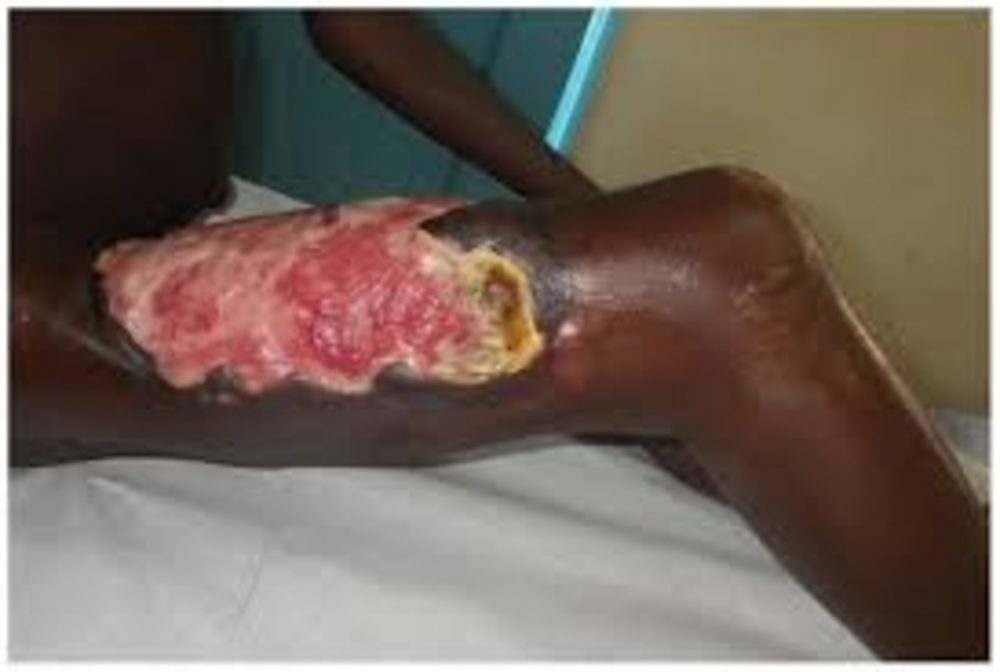 Buruli ulcer, caused by Mycobacterium ulcerans is a chronic debilitating disease that mainly affects the skin and sometime bone

Buruli ulcer, caused by Mycobacterium ulcerans is a chronic debilitating disease that mainly affects the skin and sometime bone. The organism belongs to the family of bacteria that causes tuberculosis and leprosy. However, M. ulcerans is an environmental bacterium; the mode of transmission to humans remains unknown. Early diagnosis and treatment are the main strategy to minimize morbidity, costs and prevent long-term disability.

Scope of the problem

Information gathered from scientific literature shows that Buruli ulcer has been reported in 33 countries in Africa, the Americas, Asia and the Western Pacific. Most cases occur in tropical and subtropical regions except in Australia, China and Japan. Out of the 33 countries 15 regularly report data to WHO.

The majority of cases are reported from West and Central Africa, including Benin, Cameroon, Côte d’Ivoire, Democratic Republic of the Congo and Ghana. In recent years Australia has been reporting a higher number of cases.

In 2015, 13 of the 15 countries that regularly report data to WHO reported nearly 2037 new cases. Except for a few countries, the number of cases has generally declined since 2010. The exact cause of decline is unknown.

Buruli ulcer often starts as a painless swelling (nodule). It can also initially present as a large painless area of induration (plaque) or a diffuse painless swelling of the legs, arms or face (oedema). Local immunosuppressive properties of the mycolactone toxin enable the disease to progress with no pain and fever. Without treatment or sometimes during antibiotics treatment, the nodule, plaque or oedema will ulcerate within 4 weeks with the classical, undermined borders. Occasionally, bone is affected causing gross deformities

In most cases, experienced health professionals in endemic areas can make a reliable clinical diagnosis.

Depending on the patient’s age, the patient’s geographical area, the location of lesions, and the extent of pain experienced, other conditions should be excluded from the diagnosis. These other conditions include tropical phagedenic ulcers, chronic lower leg ulcers due to arterial and venous insufficiency (often in the older and elderly populations), diabetic ulcers, cutaneous leishmaniasis, extensive ulcerative yaws and ulcers caused by Haemophilus ducreyi1.

In Australia, papular lesions may initially be confused with an insect bite.

Cellulitis may look like oedema caused by M. ulcerans infection but in the case of cellulitis, the lesions are painful and the patient is ill and febrile.

HIV infection is not a risk factor, but in co-endemic countries HIV infection complicates the management of the patient. The weakened immune system makes the clinical progression of Buruli ulcer more aggressive, and as a result the treatment outcomes are poor.

Due to international travel, cases can appear in non-endemic areas. It is therefore important that health workers are knowledgeable about Buruli ulcer and its clinical presentations.

Four standard laboratory methods can be used to confirm Buruli ulcer; IS2404 polymerase chain reaction (PCR), direct microscopy, histopathology and culture. PCR is the most commonly used method. WHO has recently published a manual on these 4 methods to guide laboratory scientists and health workers.

Treatment consists of a combination of antibiotics and complementary treatments (under morbidity management and disability prevention/rehabilitation). Treatment guidance for health workers can be found in the WHO publication “Treatment of mycobacterium ulcerans disease (Buruli ulcer).”

Different combination of antibiotics given for 8 weeks are used to treat the Buruli ulcer irrespective of the stage. One of the following combinations may be used depending on the patient:

For pregnant women, the combination of rifampicin and clarithromycin is considered the safer option because of contraindication to streptomycin.

In Australia, a combination of rifampicin (10 mg/kg once daily) and moxifloxacin (400 mg once daily) is routinely used with good results but its effectiveness has not been proven by randomized trial.

Interventions such as wound management and surgery (mainly debridement and skin grafting) are used to speed up the healing thereby shortening the duration of hospitalization. In addition, physiotherapy is needed in severe cases to prevent disability. Those who are left with disability require long-term rehabilitation. These same interventions are applicable to other neglected tropical diseases, such as leprosy and lymphatic filariasis so it is important to integrate a long-term care approach into the health system to benefit all patients.

There are currently no primary preventive measures that can be applied. The mode of transmission is not known and there is no vaccine.

There are 2 ongoing research activities aimed to improve the management of the disease.

A randomized clinical trial coordinated by WHO started in Benin and Ghana in 2013 with the objective of developing an oral-based treatment for Buruli ulcer. The recruitment was completed at the end of 2016 and the one-year follow-up will end in December 2017.

These efforts have also helped to raise the visibility of Buruli ulcer, and mobilized resources to fight it. Under AHO’s leadership and with support of nongovernmental organizations, research institutions and governments of affected countries, steady and impressive progress has been made.

Mitjà, O et al. Haemophilus ducreyi as a cause of skin ulcers in children from a yaws-endemic area of Papua New Guinea.