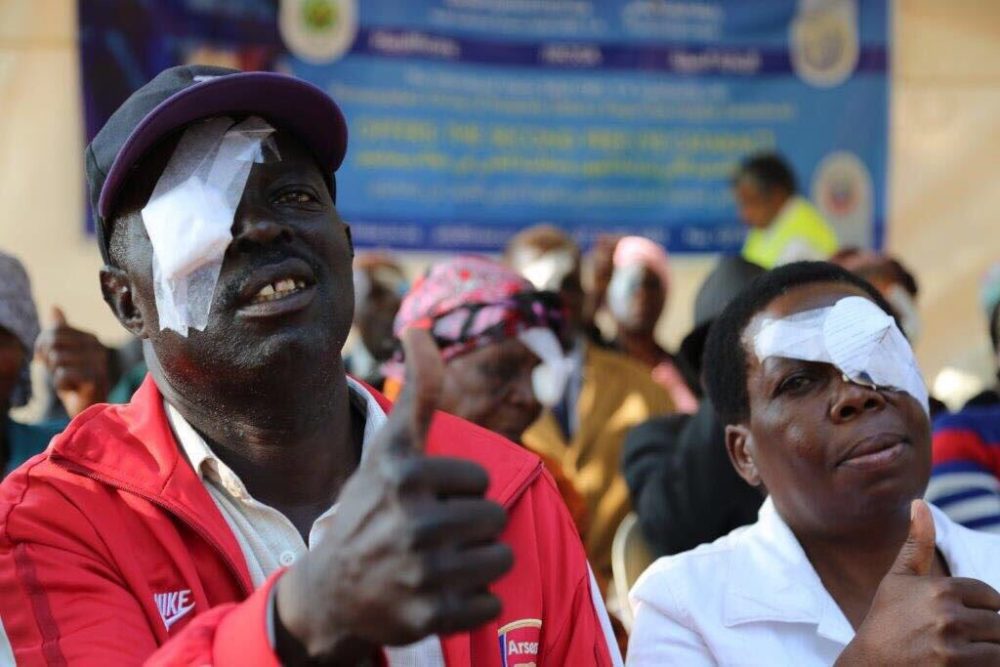 According to the latest assessment, cataract is responsible for 51% of world blindness, which represents about 20 million people (2010).

According to the latest assessment, cataract is responsible for 51% of world blindness, which represents about 20 million people (2010). Although cataracts can be surgically removed, in many countries barriers exist that prevent patients to access surgery. Cataract remains the leading cause of blindness. As people in the world live longer, the number of people with cataract is anticipated to grow. Cataract is also an important cause of low vision in both developed and developing countries.

Onchocerciasis is a major cause of blindness in many African countries. As a public health problem, the disease is most closely associated with West and Central Africa, but it is also prevalent in Yemen and six countries in Latin America. Onchocerciasis has in the past greatly reduced the economic productivity in infected areas and left vast tracts of arable land abandoned. It is estimated that there are about half a million blind people due to river blindness.

Recent studies have confirmed the existence of a large burden of uncorrected refractive errors, although the interventions required are significantly cost effective, and have an important impact on economic development and quality of life. Severe refractive errors have been estimated to account for about 5 million blind people. According to the most recent data available to WHO, there are an estimated 124 million people in the world with low vision. About a fourth of these would benefit from low vision services.

There are important differences over the past few decades in diagnosis, medical care, socioeconomic factors and other risk factors that influence the prevalence and geographic distribution of diabetes and retinopathy as well. It is estimated that in 2002 diabetic retinopathy accounted for about 5% of world blindness, representing almost 5 million blind. As the incidence of diabetes gradually increases, there is the possibility that more individuals will suffer from eye complications which, if not properly managed, may lead to permanent eye damage

The number of persons estimated to be blind as a result of primary glaucoma is 4.5 million, accounting for slightly more than twelve per cent of all global blindness. Risk factors are those limited to the onset of disease and those associated with progressive worsening in already established disease. The primary risk factors that are linked to the individual and the onset of the disease are age and genetic predisposition. The incidence of POAG rises with age and its progression is more frequent in people of African origin. ACG is the common form of glaucoma in people of Asian origin.

Globally, AMD ranks third as a cause of blindness after cataract and glaucoma. It is the primary cause in industrialized countries. The main risk factor is ageing. Other risk factors may include the use of tobacco, genetic tendencies, the degree of pigmentation (with light coloured eyes being at higher risk), arterial hypertension, the ultraviolet rays, and consumption of a non-balanced diet.

The 4th cause of blindness globally (5.1%), corneal blindness is one of the major causes of visual deficiency after cataract, glaucoma and age-related macular degeneration (AMD). Trachoma is responsible for nearly 4.9 million blind, mainly as a result of corneal scarring and vascularization. Ocular trauma and corneal ulcerations are significant causes of corneal blindness. They are often underreported but they are estimated at 1.5 to 2.0 million new cases of unilateral blindness every year. Among the causes of childhood blindness (approximately 1.5 million cases in the world and 5 million children with visual impairment) appear xerophthalmia (350,000 cases per year), new-born conjunctivitis, and rarer ocular infections like herpes and keratoconjunctivitis.
Even though the control of onchocerciasis and leprosy are public health success stories, these diseases are still significant causes of blindness, affecting approximately 250,000 individuals each. Traditional eye medicines have also been implicated as a major risk factor in the current epidemic of corneal ulceration in developing countries.
Corneal visual impairment encompasses a wide variety of infectious and inflammatory eye diseases that cause corneal scarring, witch ultimately leads to functional vision loss.

Knowledge about genetic eye diseases has increased dramatically during the last twenty years. Although there are no global statistics which let us know the extent of the burden of visual impairment from genetic causes, it does seem that genetic eye pathology represents a significant percentage of the causes of blindness in industrialized countries.