Smoking rates on the rise in Africa as they decrease globally 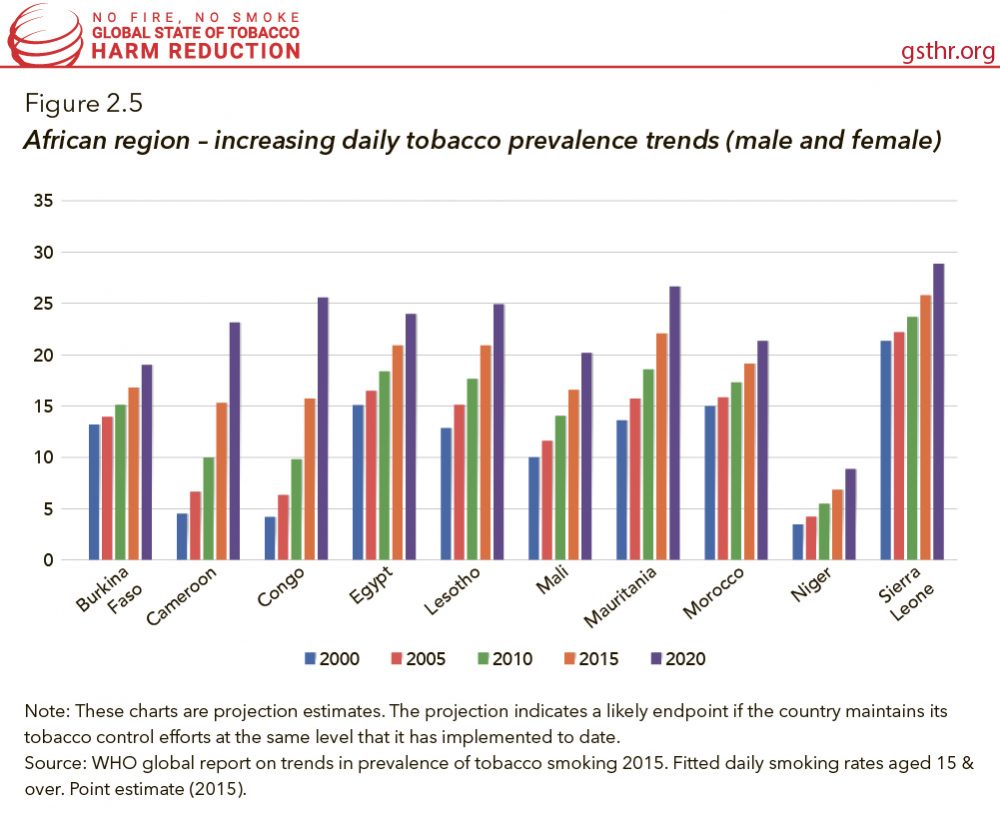 Public health experts visit Malawi and Kenya, arguing that Africans must have access to lower-risk alternatives to smoking

LONDON, March 18, 2019 /PRNewswire/ — Smoking tobacco results in the world’s deadliest preventable diseases, ending the lives of half of all smokers prematurely. By the end of the century, the World Health Organization (WHO) estimates that one billion people will have died from a smoking-related disease.

Globally, smoking rates are decreasing, but in many lower and middle income countries, African nations among them, rates are increasing. WHO data show a steep rise in smoking in many African countries, with many 5-year projected increases at 5% and more.

Public health experts from UK-based Knowledge∙Action∙Change have this week visited Lilongwe, Malawiii and Nairobi, Kenya to launch No Fire, No Smoke – The Global State of Tobacco Harm Reduction 2018 (GSTHR), a landmark report on the worldwide availability, regulation, and use of lower-risk alternatives to tobacco, such as e-cigarettes (vapes), heat-not-burn devices, and Swedish snus (pasteurized oral tobacco).

Independent evidence from the UK government’s leading public health body demonstrated recently that vaping is at least 95% safer than smoking tobacco. Yet despite the WHO Framework Convention on Tobacco Control (FCTC) of 2003 citing harm reduction as one of its main tactics, the WHO has been persistently negative about e-cigarettes, has called for their ban or strict regulation, and sees them as a threat, rather than as a public health opportunity.

Partnering with the information dissemination project, Tobacco Harm Reduction Malawi, and the newly launched Campaign for Safer Alternatives based in Kenya, the GSTHR report’s publishers presented global findings on tobacco harm reduction, showing that many smokers have switched to safer products and dramatically reduced the risks associated with smoking.

“We need to halt the dramatic rises in smoking rates in Africa which are predicted by WHO,” asserted Professor Gerry Stimson, Director of Knowledge∙Action∙Change and Emeritus Professor at Imperial College London. “Most smokers want to quit smoking, but they find it hard to stop using nicotine. Around the world, millions of lives depend on both consumer and government acceptance of safer alternatives to smoking.”

Joseph Magero, Chair of the Campaign for Safer Alternatives and holder of a Global Tobacco Harm Reduction Scholarship, noted: “Society’s relationship with tobacco and nicotine is changing due to developments in technology, such as vapes and other safer nicotine products. The Campaign for Safer Alternatives has formally launched this week to ensure more people across East Africa receive accurate information on alternatives to smoking. By arming people with information, we can finally begin to curb the tobacco epidemic.”

The No Fire, No Smoke – Global State of Tobacco Harm Reduction 2018 report and this press release are published by Knowledge∙Action∙Change, a private sector public health agency based in the United Kingdom.